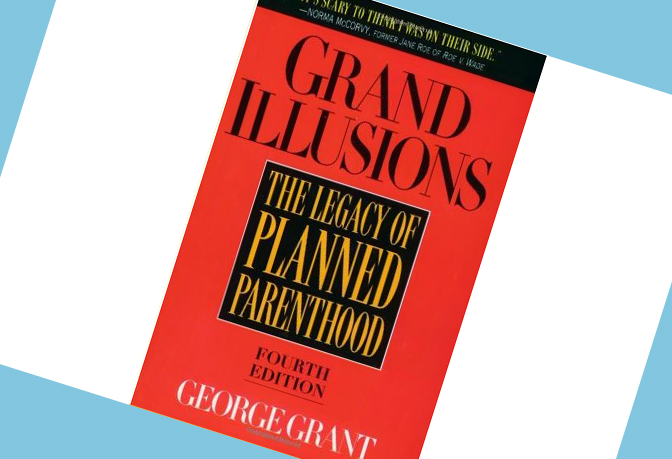 George Grant writes in a manner that can illicit every negative emotion possible. I have never read a book that has made me as sick, angry, frustrated, and heartbroken as I felt reading this one. I have always known that Planned Parenthood was an evil organization, but until now, I did not know the level of deception that has played out on the American people and the world. The reader will get an in-depth study on Margaret Sanger and Planned Parenthood and how they were able to deceive, plan, and push their progressive agenda. The book is written from a strong Christian perspective, which is good for Christians but beware that it has the potential to turn the subject into a religious debate instead of focusing on a more general moral debate.

Grant released Grand Illusions in 2000, but the history and agenda are still relevant. Even though seventeen years has passed since then, the statistics are astounding and will still affect the reader. The fact that Planned Parenthood has permeated every aspect of our society and culture, from neighborhoods to schools to churches, is a testimony to their bold attack on civilization. The very first birth control clinic that Margaret Sanger opened was in a part of New York City with poor, ethnic minorities to begin eradicating those whom she did not see fit to breed.  She advocated for using forced sterilization on the disabled and mentally handicapped. One of her advisors was Ernst Rudin, who while he was advising Margaret Sanger, was also Adolf Hitler’s director of genetic sterilization.  Margaret Sanger’s goal, as well as that of Planned Parenthood, was to control the number of minorities, Christians, and poor who would be born.

The detail and research that Mr. Grant put into the book are mind-boggling. At times, the medical jargon is a little difficult to navigate, but the amount of information available is staggering. Planned Parenthood’s blatant attack, through media and our court system, on those who oppose them is criminal at best and yet our government continues to bend their knee and our tax dollars to them. When they are unable to be truthful about an opponent, they make up lies and find “journalists” who will publish those lies without fact-checking the details. Planned Parenthood has huge sway over the major networks, publications, and radio outlets.

From the time that Planned Parenthood took control of our sex education curriculum in our schools, the number of teen pregnancy and STD’s has increased. They use porn, fantasy, and bullying tactics to spread their perversion and debauchery throughout our school systems with the praise and support of school principals and boards. Throughout the book, Mr. Grant uses many personal testimonies of students who have been affected by the lies and deception of the school clinics run by Planned Parenthood. Those in charge undermine any parental or community morality. They teach and encourage many forms of perversion as though they are normal. To gain control, they use brainwashing, ridicule, and coercion to force teens to follow and even spread their evil doctrine.

Grand Illusions will open your eyes to the atrocities of abortion and the deception of Planned Parenthood. Mr. Grant goes into detail on the various abortion procedures, as well as the effects and effectiveness of the many birth control methods that they boast are safe and yet they are not. Though they profess to stand on scientific data, science clearly refutes everything for which they stand.

The reader of this book will see the many fingers of Planned Parenthood and the groups that support and promote them all while masking their true intentions. Modern society has rewritten history to portray Margaret Sanger as a saint when in fact she was very evil, just like her contemporaries Adolph Hitler and Joseph Stalin; the only difference is that her war was on poor minority women and their unborn. Planned Parenthood implemented genocide in countries such as Yugoslavia and China until the undesirables rose up and fought back; only then did the media report on it.

I highly recommend this book to those who support Planned Parenthood so that they can clearly see what they are supporting. I also recommend this book to those who oppose Planned Parenthood so that they will have the facts to fight against this dragon. I appreciate that not only are the facts laid out well but it also offers suggestions on ways to take down this beast. Overall, it is a powerfully written book exposing the great horrors, perversion, and evil legacy of this international organization.