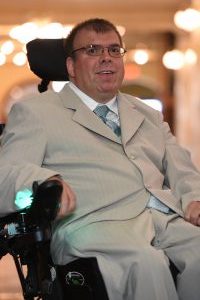 Whom Shall We Kill Next?

A friend of mine, Tait, (pictured above) lives with a disability. With all the hoopla in the news about the new NY abortion law, he makes an important statement. “If they can kill babies at birth, they can kill anyone who has a disability anytime in his/her life!” A lot of people jumped in on the conversation, and Tait said he was waiting to hear my thoughts. Here they are:

"People who live with Down Syndrome are usually the nicest, sweetest, most caring people you'll ever know. Though they need care. Who's to say they're not the normal ones and the rest of us abnormal?"

Who Gets to Declare the Value of Human Life?

Devaluing any segment of humanity makes it easier to devalue another then another. In Iceland, 100% of Downs babies are aborted. About 90% in America. Next, it will be legal to kill them after birth.

In Colorado, where I live, abortion is legal up to 26 weeks for any reason, and up to 34 weeks for fetal anomalies (birth defects) and other specific issues. To me, as far as humanity goes, Jesus came to earth as a blastocyte (fertilized egg). He didn't suddenly become human at birth. He was no less Jesus as a blastocyte than he was as an infant in Mary's arms. He was created in God's image, as are all humans, known by God before conception.

It doesn't matter whether a person is a blastocyte or a 9-month preborn. They are a person created by God. Though it appears more horrific to kill the 9-mo preborn, it's just as desecrating to the human race to kill the blastocyte. Remember, I say this not out of judgment, because I participated in the death of my first two children. I was led astray.

Should People with Disabilities be Concerned?

To get to your point, Tait, I believe there is great cause for concern for people with disabilities. My point about Down’s babies being aborted. People are born with Down’s Syndrome are usually the nicest, sweetest, most caring people you'll ever know. Though they need care. Who's to say they're not the normal ones and the rest of us abnormal?

Euthanasia is legal here in Colorado and a few other states. Another sign to be concerned about. Now it's optional. When will it become mandatory for those someone feels is not worthy to live?

Should Black People be Concerned?

Monday, 1/21/19, we celebrated MLK Jr. Day, equal rights for black people, same as everyone else. Wednesday, 1/23/19 was the anniversary of Roe v Wade which made it legal to kill any baby in the womb up to till birth, states decide limits.

I saw all these black people celebrating the new abortion law in NY. What most people don't know is that the highest percentage of abortions in any race is blacks. This is no coincidence as Margaret Sanger, founder of Planned Parenthood, had an agenda to use abortion to eliminate the unintelligent, the poor, the sick, and non-white races, specifically blacks. Planned Parenthood denies this, but they continue to celebrate her.[1]

My question is, why are all these black people celebrating NY abortion law? They are pawns in a deadly agenda. Totally duped into thinking this new law is a good thing for them. Celebrating that they can kill their unborn black children, fulfilling Sanger's dream. All that MLK fought for on their behalf and preached about... They just don't get it!

Is Politics Where the Battle is Won?

My battle with abortion is not with the people of the world or with the law. What does the church have to say about it?

The day most of us missed was Sunday, 1/20/2019. Sanctity of Human Life Day, coinciding with the anniversary of Roe v Wade. Does the church teach the SOHL? Not so much, though not knowing it was SOHL Sunday, our Pastor Kenneth Robertson's sermon nailed it!

It is the church that can make a difference, first in teaching the SOHL within the church, valuing Mama as much as Baby. Valuing Black the same as White. Valuing the disabled as much as those who appear "normal", born and unborn.

But most of the church is silent while more than one Christian's baby is aborted every 4 minutes in this country. We don't speak up about what is happening within the church, so why are we all freaking out about what the world does?

Most of the church remained silent when the Nazis were killing off six million Jews. We're doing it again, only now it's the unborn. And it’s sixty million so far. Image bearers of the Creator. And we are silent.

Can't speak of it in the church while we're responsible for the majority of abortions. Recent studies have shown that anywhere from fifty four percent to nearly seventy percent of abortions in America are done on women who identify as Christians.[2],[3] And nearly forty percent of them were attending church regularly at the time of their first abortion.[4]

Where Do We Start?

Hope that gives a little perspective, Tait. Sorry it's so long, but it's complicated. My books explain a lot more. The stories in Memoirs of A Christian Who Chose Abortion were extracted and expounded upon from Why Can’t We Say the “A” Word in Church? Overcoming Our Dirtiest Secret with Hope and Grace. Why Can’t We Say the “A” Word contains the information about The Scenario of abortion and its ensuing trauma in the US, the world and the church; The Dilemma the church faces in addressing abortion; and The Remedy for how to address abortion in the church comprehensively and with compassion.

I just want to say I'm thankful for you, Tait! You bring value to this world that no one else can. You have struggles that most of us can't even imagine. But your smile says it all! You are beautiful and irreplaceable, a gift from God to a cruel world that can't understand how much you have to offer.